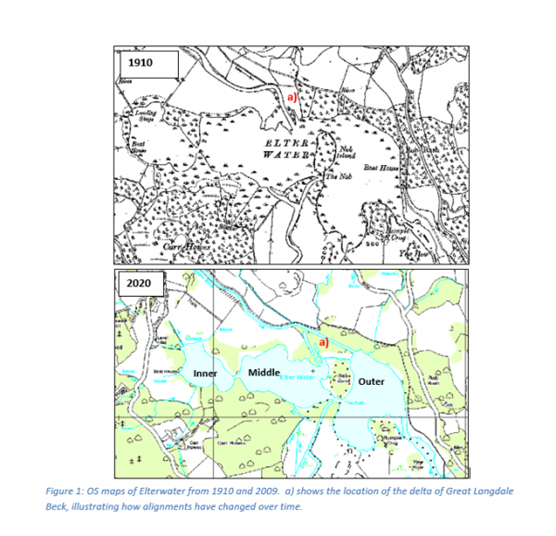 South Cumbria Rivers Trust (SCRT) have recently delivered a project to re-connect Great Langdale Beck into the middle basin of Elterwater. The project has been delivered in partnership with the National Trust, as the landowners, Natural England & the Environment Agency.

Elterwater is a Site of Special Scientific Interest (SSSI), formed of three interconnected basins. However, over the years the streams flowing into these basins have been diverted and modified so that connect straight to the outer basin. In 2016, SCRT reconnected Little Langdale Beck into middle basin. More recently in September 2021 SCRT have created some shallow scrapes through woodland to allow Great Langdale Beck to connect into middle basin. These shallow scrapes will be allowed to naturally evolve over time, enhancing wet woodland habitat and returning natural processes to Elterwater. Elterwater has also suffered from historic water pollution from the Wastewater Treatment Works which discharged into the inner basin up until the 1990s when it was diverted downstream. Therefore, the transfer of clean well oxygenated water into middle basin will also help improve water quality.

If you would like to find out more about the work which has been done to help restore Elterwater, please visit SCRT’s website.

This project was delivered under the Water Environment Grant Scheme, funded from the European Agricultural Fund for Rural Development. Europe Investing in Rural Areas.